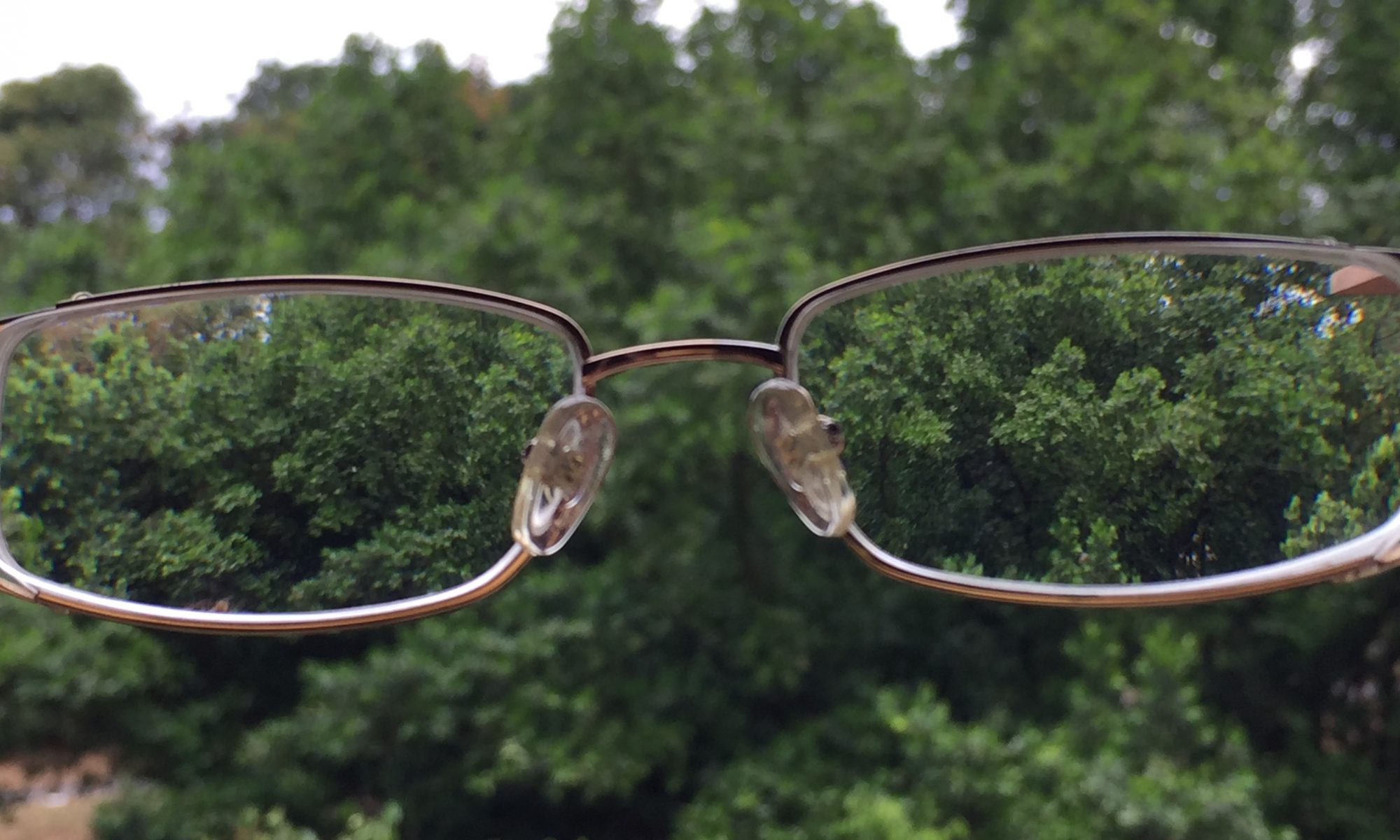 I have been having very interesting conversations with my 14-year-old recently.

Last night, she was commenting about myopia. You see, she has been saying she needs glasses for a while and recently she went to the optometrist.

C: I knew you need glasses and without them you can’t see. But I never thought about how that felt, or how blurry things would be for you without your glasses. When the optometrist put the glasses on for me and I went out of the shop to look around, suddenly everything looked clear. And when I removed them, I realised how blur things have been. If it has been so blur for me, I can’t imagine how it is for you or anyone who has worse eyesight than me. I didn’t understand how it was like to NOT be able to see. But now, I have a better idea of how it is like for you.

With that comment of hers, a light bulb came on for me.

My dear C, you have no idea how important a lesson you have taught me, AGAIN.

How often have I known, yet NOT KNOWN, how difficult things are for my children?

But I don’t REALLY know how hard it is for them to focus because I still get impatient and judgmental when they are distracted.

Likewise, when they lose their temper, I know that, for my teens, it is because of the fluctuations of hormones in their bodies making control difficult, or, for my little one, that it is because she is really tired/hungry etc.

But I don’t REALLY know how hard it is for them to control their temper because sometimes I still get triggered when they “lose” it.

And there are parents whose children are hyperactive, or depressed, or perfectionists, or have sensory sensitivities, or a zillion other challenges. How WELL do most parents REALLY know the struggles their children go through?

Most times, we may feel “if only the kids would try harder…”, or worse, “they are leading us by our noses, manipulating us,” etc. I know I have been guilty of that.

If we really KNOW how our children feel and how they struggle, we will not have those thoughts at all.

The truth is we don’t REALLY know how hard it is for them to function “normally” unless we have the same condition as they do. That is why we tend to be more critical and impatient, less sympathetic and loving.

Unfortunately, that does not help our children. Our lack of empathy and lacklustre support makes it even harder for them to function normally.

So while I may “know” my children are having a tough time, and that they are doing their best, I still need to do the following:

Once again, I am grateful to C for the insight she has given me. May her insight help you decode your children so you can help them overcome whatever challenges they have as well. 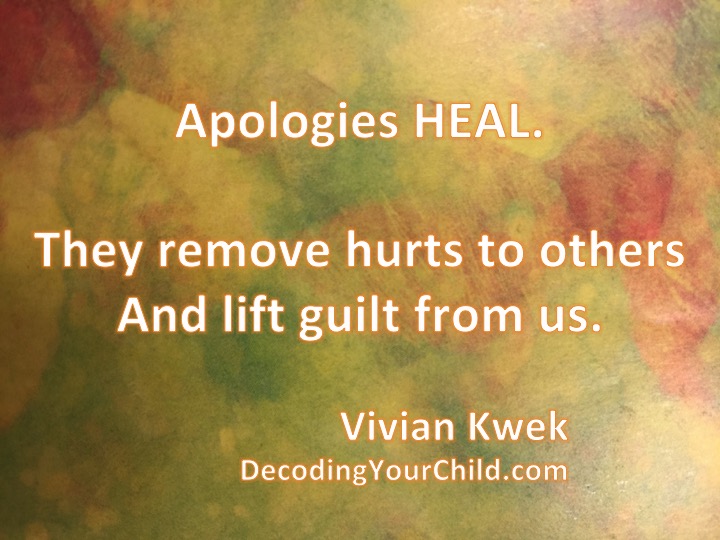 So last night, my 14-yo asked me to help dry her hair as she has hurt her shoulder and can’t raise her arm to hold the hairdryer.

As I dried her hair, nostalgia hit me. When was the last time I dried and brushed her hair? I couldn’t remember.

Then as if reading my mind, C started talking.

C: Mom, it has been so long since you dried my hair. I think the last time was at Falling Water or was it at Waterford? The house w a pond in the backyard.

Me: That’d be Falling Water.

Me: Oh, is that right? I don’t remember. I only know I haven’t dried your hair for a very long time.

C: Yes. I think you were very hurt when I said that.

C: I remember thinking about what I had said when I was in bed that night and realised it was not a nice thing to say. I felt “ouch!” But I never apologised to you. I’m sorry.

And after that, she gave me a big hug.

We parents usually don’t remember the hurts caused by our kids. Otherwise we would have been too wounded to function.

Maybe I was hurt at that time. But because I had buried it or chose to forget it, it didn’t bother me.

But MAYBE I still carried the hurt unconsciously because I realised her apology had lifted me. It showed me she was aware, and it showed she cared because it had bothered her that I was hurt. And I actually felt lighter.

Maybe I WAS hurt but her apology has healed it.

And it’s obvious that careless comment she made all those years ago (8 years?) still bothered her. But because she got the opportunity to apologise, her guilt got lifted and she got healed.

So, this Valentine’s Day, I strive to think about the hurts I may have caused my loved ones, the words I had said or things I had done that I had felt would have hurt them yet had never apologised for.

Maybe they won’t remember those trespasses of mine. But it doesn’t matter. Based on C and my interaction last night, I believe my overdue apologies will not only relieve me of my guilt, but also heal the unconscious wounds my loved ones have buried/ignored because of their love for me.

And I thank C for the precious gift of letting me see the value of apologies even if it seems like the other party doesn’t “mind”.

It’s personal only if we decide to make it personal.

It has been a rather crazy week this week. I had had a super full load of work to get done, plus a talk to prepare for. Unfortunately, my little 6-year-old came down with the flu on Sunday. She had been a real trooper, resting, sleeping and leaving me practically very much alone for a few days to do my work because she knew I was busy.

But by Wednesday, her love tank was empty. She wouldn’t let me go. She was only content when she was in my arms. When I attempted to reach for my phone or laptop to do some work while craddling her, she would grab hold of my wandering hand and place it firmly against her face.

And so I savoured the moments and focused my 100% attention on her until she fell in a deep sleep and I was able to snap this photo.

Soon after, she stirred and pulled my hand back to her and we stayed in that position for a few hours.

By Friday, she was well enough to go to school. She had been looking forward to seeing her classmates and teachers and it was a happy occasion as we headed towards school.

My husband had started the “tradition” of bringing iced water for her when picking her up from school because it’s hot in the afternoons. But on Friday, I did not bring any iced water when I went to pick her up as she was still having a cough.

When she realised there was no cold water, she stomped the whole way back. And when she reached home, she threw herself on the sofa and cried as if the world had let her down. She practically had a meltdown.

One was to be angry and upset that she was ungrateful, that I too had walked in the hot sun to go pick her up AND bring her home. (Guess how I knew of this option?)

Two was to ignore her and leave her alone (give her a time out).

Three was to show her love and compassion.

Truth be told, I felt anger bubbling. I felt she was ungrateful. I feared she was becoming self-entitled. And boy was I tempted to leave her and go get a glass of cold water for myself!

But in the end, I took my 2 deep breaths and I chose love and compassion.

I bent over her and asked if she wanted me to cuddle her. She put her arms around my neck, all the while still crying. I took that as a “yes” and I craddled her.

After a while, she started kicking and writhing in frustration. So I asked if she would like me to put her down. She hugged me tighter and I took that as a “no”. So I just held her while she kicked and writhed and cried. After 25 minutes, she finally calmed down. I told her a joke, she laughed and that was the end of it.

She had let all her “angries” and stress out. I didn’t take any of it personally. We both emerged fr the “ordeal” happy and deeply connected.

After we had lunch, I explained why I couldn’t give her cold water and I got a hug in return. I asked her if she knew why I didn’t bring iced water when I went to pick her up and she said she knew.

You see, I knew she had understood. But I also knew she did not have the ability or muscle to not feel or act disappointed. Plus she had just recovered from flu and must have been exhausted being in school after a long MC. She had no reserves left for any self-control. Had I chosen to get angry at her, it would have been akin to getting angry at an 8-month-old baby for not walking.

She throwing a tantrum was not an attack on me. She just couldn’t control her emotions. I do not need to take it personally, and I’m glad I stopped myself, re-wired my brain and refused to go any further down the rabbit hole of anger.

I’m not a saint who doesn’t get angry. I’m just a regular human with normal instinctive emotions. I get angry a whole lot bcos of my imprint as a child that scoring 97 or 99 out of 100 is a punishable offence. I have tremendous fear of being not-good-enough. I fear being a lousy parent. And so, yes, I correspondingly have a lot of anger.

I mean, if I were a good parent, my kids should all be behaving well, doing well, listening well, controlling themselves well. So if they act out, it must mean I have failed. My first instinct is, “oh dear, I have failed. How can I help other parents if my children are still giving me problems?”

And if you have read Part 2 of my Dealing with Anger series, you know that it will very quickly be translated by the mind into, “How dare you not do what I have taught you so many times?” which if left alone will become an explosion of anger.

But as mentioned in Part 3, I have learned to take my precious 2 breaths. And those 2 breaths have on many, many occasions given me space and time to re-wire my brain to move away from anger, face my fear and tell it to go away because I AM AN AWESOME PARENT. It’s a conscious decision every day, to re-wire my brain. Sometimes I fail, but over the years, I have had more successes than failures. My brain synapse to anger is weakening.

May you also find courage to face your tiger, face your fear and tell it to go home.

PS: If you have missed the Dealing with Anger series earlier, you can read it here:
Part 1: What is Anger
Part 2: Why We Choose Anger
Part 3: How to Overcome Anger